In this series, professionals share all the right — and wrong — ways to leave a job. Follow the stories here, and write your own (please include #IQuit somewhere in the body of your post).

It was with a heavy heart that I chose to leave General Electric back in 1988. I had basically started my professional career at GE, and had worked my way up for nearly two decades. I loved the work ethic there, the entrepreneurial environment and, most of all, the people.

Taking a job as senior vice president and general manager for Case Construction Equipment’s global business made sense; it was a step up and a way to make a big difference at this Tenneco company. But, even as I made this momentous decision, I understood that I was probably leaving GE — a company I loved — forever.

Still, I needed to leave. Like many leaders, I was driven toward innovative and sometimes even risky ventures. But, I realized later, once the goal was reached and the truly hard work was done, I was ready to move on… again.

Instead of jumping from company to company, however, I took a good hard look at my choices. Here’s what I did, and what you should do, too, if you are thinking about leaving your current position:

If, after all that, you still want to leave and have found the job of your dreams, you’ll need to tell your current employer. After making the decision to leave GE for Case Corporation, I had a gut-wrenching discussion with Jack Welch. I remember telling Jack that there was no issue between him and me, and I left his office in Fairfield knowing I had burned no bridges and had effectively explained my decision.

Four years later, I was given the chance to return, in part because my exit from GE had been made for all the right reasons, and was done without turmoil or malice. In typical Jack Welch fashion, I was not rewarded immediately for leaving and then returning; he could not set that precedent. Instead, I was given an interim position in Toronto for nine months before heading back to the U.S. to run GE Transportation. GE and Jack Welch gave me a second chance and — thanks to that — I was able to gain the “experiences of a lifetime.”

Certainly, my personal experience with Jack Welch has played a big part in influencing how I view the exit process, and has inspired me to give several other employees second chances, too. As I did with Jack Welch, these employees let me know they were considering other companies before they left. I’ve always admired confidence and open communication, so their candor definitely made a strong impression on me. After trying to convince them to stay, I frequently have then tried to help them reach their career goals. You might say these employees left the position, not the people. 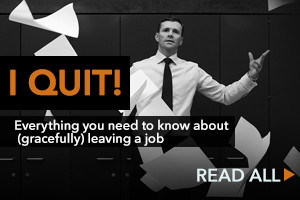 This philosophy has had unexpected payoffs. Those employees who have left my business and then returned have brought with them a variety of skills and experiences they might not have gained had they stayed put. Others who didn’t return have made great colleagues in the business community.

It’s been a win-win for me, and I hope for them.

Lessons learned? In short, leave for the right reason, do it the right way, and never forget the people you leave behind. You never know when you’ll see them again!