In this series, professionals reflect on their inevitable career mistakes. Follow the stories here and write your own (please include #BestMistake in your post).

“Experience is the name everyone gives to their mistakes.” — Oscar Wilde

How many mistakes have I made? I can’t even begin to count them. There were jobs I might have taken (I seriously thought I would play pro football), schools I could have attended, a red tie I’ve worn way too many times… In short, I’ve made a lot of mistakes. But I lived through my mistakes, learned from them, and moved on.

That’s right. I don’t spend my days harboring regrets. In fact, I take great pains to gain from each misstep, treating each and every day as the learning experience it can be. Says business consultant John W. Holt Jr., “If you’re not making mistakes, you’re not taking risks, and that means you’re not going anywhere. The key is to make mistakes faster than the competition, so you have more chances to learn and win.”

While I don’t think of life as a mistake-laden treadmill, I agree with Holt that there are lessons to be learned from each experience. Although I certainly don’t want a life where bad decisions outweigh the good ones, I recognize that every decision won’t be the right one. Part of growing is trying out different avenues to determine which is best. In today’s fast-paced world, if you wait for perfection, you will be left behind.

Sometimes I’ve made mistakes not because I made the wrong call, but because my commitment to it was incomplete. When I was asked to lead the energy business for GE, it was being out-performed by nearly all of the GE businesses. The people were strong and the products were solid, but it needed a new approach that relied much less on selling only steam turbines. With a portfolio expansion of more than 50 acquisitions on the strength of our “Wellhead to consumer” vision, the team took the energy business to the top of the GE portfolio in just two years.

This experience begs the question, “Where was the mistake?” In my view, I should have gone further and faster, not only in expanding our service offerings (a very profitable move that helped sustain us long after our surge in equipment sales slowed) but, most notably, in the oil and gas arena. We took the bold move to purchase an oil and gas company, and it worked out well – but I learned from that experience that I could have “gone bigger.” I made the more cautious decision not so much because I lacked confidence, but because I was trying to be prudent as I managed the business’s transformation. Again, it’s hard to be disappointed by exceptional results, but taking a bigger swing would have made our business even stronger.

Over the last couple of years, GE has definitely gone “all in” in oil and gas. While dropping oil prices have made that move seem a bit suspect, anyone who knows the cyclical nature of the business should recognize that it will probably work out.

I have often been asked why we did not get into the renewables arena when I ran the energy business. That decision was not a mistake. At the time, the technologies, returns and public acceptance dynamics simply were not there. (Believe me, we looked!) Less than a decade later, the time was right, and GE stepped in and helped the industry and its businesses grow.

Mistakes, then, usually are not a terrible thing. Can they lead to difficulties? Sure. They can even change the direction you’re headed and, in the extreme, they can change your life. But should you regret them? 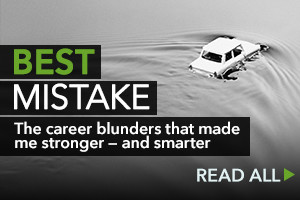 No, says legendary UCLA basketball coach John Wooden: “If you’re not making mistakes, then you’re not doing anything. I’m positive that a doer makes mistakes.” Albert Einstein echoes that thought: “Anyone who has never made a mistake has never tried anything new.”

Obviously, with the ability of hindsight, most of us would make some different choices, and I’m no exception. Meanwhile, I tend to look forward, not backward, even as I keep learning from the mistakes I undoubtedly will continue to make.

Life, after all, is to be lived. I won’t spend my days mourning my choices. I hope you don’t either!